Gaffney, South Carolina native Andie MacDowell is known for her roles in such hits as Four Weddings and a Funeral, Groundhog Day, and St. Elmo’s Fire, Now she stars in the new Netflix series, Maid. It has been one of the network’s most popular worldwide and is bringing widespread attention to the issue of domestic violence. The series portrays the challenges of escaping an abusive relationship from a safety, financial, vocational, and logistical standpoint. Maid’s main character is Alex, played by Margaret Qualley, who is trying to leave an emotionally abusive home environment with her daughter. The series portrays the challenges that victims face in finding a safe path forward.

Series co-star Andie MacDowell plays Alex’s Mom, Paula. The South Carolina native is Qualley’s real-life mother. She says of the show’s impact, “I love how it’s touching so many people. I go through the airport, and people just have tears in their eyes. They really relate to it.” She relates an encounter with a woman working in security in an airport who relayed her personal story. “Her eyes had tears in them. She was talking about the poverty. It resonated so much with her. She had been in an abusive relationship, and she had gone through that system.”

MacDowell feels she can personally relate to the situation portrayed in Maid. “I do feel like I grew up, being told, as a woman, to mind men. We made excuses for men. I learned how to maneuver myself around men’s control, and we were less than. That can lead a dangerous man to feel they have the right to tell women what to do. That can come from the social structure of who I’m supposed to be”

As for the lessons from the series, Andie says, “It doesn’t always mean that someone’s hitting you. If you watch Maid, It can be emotional control or dominance sexually, it’s a fine line of trying to figure out what you and understanding what you deserve. Someone does not have the power to tell you what to do and to control you. If you’re in it constantly, it’s really hard to see. It’s quite common for those that have grown up in abusive families. They don’t understand what they deserve. They’re so comfortable with chaos. They will gravitate toward it because they know it.  I know this because I’ve done it.” This is supported by the fact that, on average, women go back seven times before finally leaving a violent situation permanently.

MacDowell says that she didn’t see the potential impact the show would have while filming. She says, “I wasn’t there all the time, so I couldn’t see the whole thing. I didn’t see it until I watched it, and then I was like, Oh my God.” Of the show, MacDowell says, “For me, it really gets powerful in the last three episodes.”

It is widely known that alcoholism played a role in Andie’s young life. Her mother fought it, finally getting sober in the last year of her life. Andie weighs in on her inspiration for her character, Paula, “We can all relate. It is my truth on so many levels. I feel bad that it’s been blown out of proportion that I got my information from my mother. My mother did suffer, but it’s not my mother. My mother was not this flirtatious character. That just came from my imagination.”

Critics have also raved over the performance of MacDowell’s daughter Margaret and how she meshed with her young co-star. Andie also sings her praises. She says, “I was watching her, how she worked with the child (four-year-old co-star actress Rylea Nevaeh Whittet). She made this child fall in love with her. She devoted herself to this child, and the child became a significant character, which wouldn’t have happened if Margaret hadn’t facilitated that. When she was at work, she wasn’t just doing her character; she was playing Mother. She spent weekends with her; she made sure that they took the time to get the lines from her.” Qualley was quoted in an Indie Wire interview “I made it really important for me to protect [Whittet]. I wanted her to have the best fourth year of her life.” It worked as the chemistry between the two was highly credited. 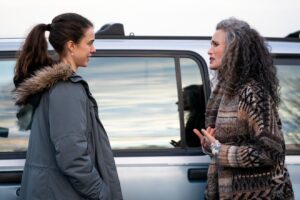 The ripple effect from Maid has made significant positive impacts for those who work with domestic violence victims. In the Upstate region of South Carolina, Safe Harbor is one of the leading resource centers for victims of domestic violence. Amanda Callahan is Safe Harbor’s Director of Prevention and Outreach. Callahan says, “The thing that Maid does so well in what it portrays is that it doesn’t have to be physical abuse. She (Alex) still is wrapped up in domestic violence services in the shelter she goes to. The same is true with Safe Harbor. Even if your partner has never touched you, emotional abuse is real.”

Another positive impact that Penelope House has seen from Maid is an uptick in donations. She says she hears from people in her community, “I always knew who you were and what you do, but I never gave. After watching Maid, I’m gonna be a monthly donor.”

Wendy Mahoney is the Executive Director of the Mississippi Coalition Against Domestic Violence. She makes several points as to what the show portrays. In the first episode, when Alex first leaves, she goes to her friends, who did discount her situation. Wendy feels that the show clearly illustrates how, because victims often hide the abuse, revealing the abusive situation to their friends and family often comes as a shock. “When it’s time to leave or explain to someone, most people don’t understand or believe you were living in an abusive relationship. You were ashamed or protected the abuser because, in reality, most people love the person; they just want the abuse to stop. There could be another level of intimidation. The fear is so great that it grips you, and you tend not to tell.”

Wendy got feedback on the show from her inner circle of friends and family. Comments like “It really hit home.”, “I could identify with some of the feelings.”, “I have a greater depth of understanding.” and “There were some things I just didn’t know” illustrate the show’s effect on viewers.

Wendy refers to the program’s powerful message with Alex’s financial situation. On the show, Alex’s bank balance is shown on the screen, adjusting with every income and expense. This clearly points out how quickly the money she earned went to needed necessities, like food and gas, and the value judgments victims have to make.

NPR reviewer David Bianculli calls Maid “An unflinching portrait of a Single Mom’s will to survive.” He also points out a positive message of hope from the series, “Any description of Maid threatens to sound unremittingly bleak, but it’s not. In the moments of joy that surface, the small victories, the unexpected showings of support, the real message of Maid is that each one of those small acts of kindness is indeed what can keep Alex going. And, really, any of us.” 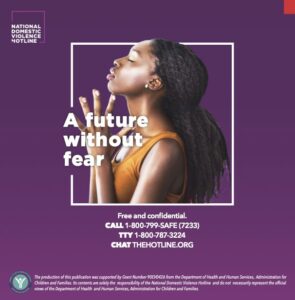 If you or someone you love is in an unsafe situation, you can get help from the National Domestic Violence Hotline. You can log on to thehotline.org, call 1-800-779-SAFE (7233), or text START to 88788. This service has a directory of local providers that can get you help. They share the following tips;

Internet usage and cell data can be easily monitored.

Your history can never be erased entirely from a computer or device, even if you browse in “private” or incognito” mode.

Global Positioning System trackers can be placed in your car or on items like your purse or cell phone.

Some court systems publish their records online, which could contain compromising personal information like names or addresses.

Portions of this article were previously published in the Electric City News, Anderson, SC, by the same author.

Next Sunday, what is to me, the world’s most … END_OF_DOCUMENT_TOKEN_TO_BE_REPLACED