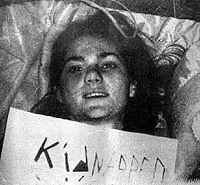 The plot could have come from a mystery novel or a Hollywood blockbuster, but it’s an actual, horrific story that happened near Atlanta, Georgia, in 1968. A college student, the daughter of a wealthy Florida businessman, is stalked, kidnapped, and buried alive. There were ransom drops, fake identities, the President-elect’s involvement, police helicopters chasing fugitives through a swamp, the first woman on the FBI’s 10 Most Wanted List, and much more.

In 1968, Barbara Jane Mackle was a junior at Emory University. Her father, Robert Mackle, was a millionaire and co-owner of Deltona Corporation, a large, publically traded company. Shortly before Christmas break, during finals for the fall semester, the Hong Kong flu swept through the Emory student body, and Mackle came down with it. Her mother, Jane, drove up from the family home in Florida to take care of her sick daughter. The school’s infirmary was full, so Jane had taken a room at the Rodeway Inn in Decatur, near campus, and Barbara stayed with her. The plan was to drive home to Florida for Christmas if Barbara improved. They had no clue as to the horror that was looming.

Gary Stephen Krist was, by all accounts, a bright man but possessed by criminal instincts. Born in Alaska in 1945, his career in crime began at age 14, and he was a fugitive at the time of the kidnapping, having escaped from a California prison in 1966, where he had been serving time for auto theft. Later authorities suggested that he possessed a genius I.Q. In the fall of 1968, he began researching his most grandiose crime.

Unbeknownst to Mackle, Krist had been stalking her and learning the details of her life. Perusing the Miami Public Library’s social register, he had found the family’s information. When he learned of their 20-year-old daughter, he chose them as his ideal target. He then set about learning the particulars of the family members.

Read about the 1962 plane crash that killed over 100 Atlantas returning from an art discovery trip to Europe.

At around 3 AM on December 17, 1968, there was a knock at the motel door, with two visitors identifying themselves as police officers. Krist was accompanied by Ruth Eisemann-Schier, who dressed as a man. They announced that there had been a vehicular accident involving a white Ford, the type of vehicle that Mackle’s boyfriend, Stewart Hunt Woodward, drove. As Jane removed the safety chain securing the door, the two forced their way into the room, brandishing weapons. The kidnappers used Chloroform to neutralize Jane Mackle, and Barbara was taken from the room into a running car, a Volvo, parked outside.

During the drive that followed. the two kidnappers threatened to Chloroform Mackle, but she protested her congestion kept her from breathing and insisted she would comply with their orders. The pair took her to a rural location in suburban Gwinnett County. They did apply Chloroform and placed Mackle in a wooden box, already situated in a hole in the ground. It was 7 x 3 x 3 1/2 feet, lined in fiberglass cloth, and contained a light, some food, a blanket, a sweater, a fan, a pump, in case water invaded, and drinking water, which had been laced with sedatives. Two hoses protruded for air intake. She was placed inside the box. The kidnappers took a photo of her holding a sign with the word “kidnapped” on it. Later, Mackle said of the picture, “I just had to smile. I was thinking, if Daddy saw it, I didn’t want him to think they had hurt me.” The box was then closed, covered with 18″ of soil, and Barbara was left alone.

When Jane Mackle awakened in the hotel room, her hands and feet were bound, and her mouth taped over. She hopped out of the room into the parking lot, where motel employees noticed her. They got her to a phone where she called DeKalb County police, then Stewart Woodward, who rushed to the motel. Woodward called Barbara’s father, Robert, who instructed him to hang up and call the FBI. Robert immediately flew to Atlanta and for key employees and family members to remain in the family home to communicate with the kidnappers. Mackle and his brothers were friends with President-elect Richard Nixon, who was advised of the situation and then asked FBI Director J. Edgar Hoover to direct the investigation personally.

Another tragic crime that took place in Gwinnett County was the murder of 21-year-old Mala Still, on Christmas Eve, 1973. Read the story here.

The kidnappers had buried it under a tree at the family’s Florida home on a previous scouting visit. Later, after Mr. Mackle had returned to the family’s Coral Gables home, a caller provided directions to the ransom note. Instructions were detailed and demanded $500,000, in $20 bills, with specifics for condition, sequence, etc. The caller advised the family to place an ad in the local paper when the family agreed with the demands. The family placed the ad, and delivery of the ransom was arranged. The first ransom drop was botched after a nearby neighbor noticed suspicious activity in the early morning hour and called the police. The responding police officers encountered the kidnappers, who managed to evade police but dropped the money. Searching the area, police located their vehicle, the Volvo they had used in the kidnapping. In the vehicle, they found the photo of Mackle. There was documentation showing the car’s registration to George Deacon, who authorities soon determined was a Krist alias, as well as I.D.s and photos from Krist and Eisemann-Schier.

The family was concerned that the kidnappers would be scared off, so they elected to run an ad in the local paper advising that they had nothing to do with the mixup. The kidnappers initiated dialogue through local priests and soon called the family again. Police arranged another ransom drop. This one went according to plan. The kidnappers had promised to reveal Mackle’s location once they had retrieved the ransom. The FBI knew their identities by the time the kidnappers had picked up the money.

Krist rented a car and then called FBI Headquarters the following day, December 20, 1968, with crude directions to Mackle’s location. She had been buried near Berkeley Lake, GA, a small town 25 miles northeast of Atlanta. The FBI set up a command center in nearby Lawrenceville, and agents fanned out to search for Mackle. Authorities soon located her burial spot and, digging frantically, soon rescued her from the box. She had been there for over three days. She was dehydrated and had lost 10 pounds, but she was in excellent condition given the ordeal. The FBI Director himself called to notify the parents of her rescue. Shortly after her recovery, the Mackle family returned to their home. President-elect Nixon visited them there on December 24, 1968.

Krist was hiding out in South Florida. He decided his best escape from the area was via water. The ransom details had been well covered in the media, so when Krist purchased a boat and made a cash payment in $20s, he aroused the boat seller’s suspicions, who alerted authorities. Warrants were issued for Kirst and Eisemann-Schier.  Krist traveled through several locks in the new boat and headed west toward the Gulf of Mexico. He used a story that his registration paperwork had been lost. Still, the tender at the last lock on his route became suspicious and alerted authorities, who determined the man’s identity and began searching for him. A helicopter spied him, and he then beached his boat on Hog Island and took off on foot. Around 200 agents and deputies began the search for the fugitive. Krist was found approximately 12 hours later and taken into custody. The bulk of the money was discovered in his abandoned boat. Tragically, a state wildlife officer heading to the site to assist in the search was killed in a car crash on the way to the scene.

Krist was found guilty in his trial and sentenced to life in prison. Throughout his incarceration, he became connected to some prominent people, including the head of the state’s parole board. Using these influences, he was granted parole after serving ten years and later was able to have his conviction pardoned to attend medical school. He began a medical practice but later lost his license. In 2006 he was convicted of possessing cocaine and sentenced to five years and five months in prison.

Eisemann-Schier had the dubious honor of being the first-ever woman on the FBI’s 10 Most Wanted List and was apprehended 79 days later in Norman, OK. She was convicted, sentenced, and deported to her native Honduras after being paroled. 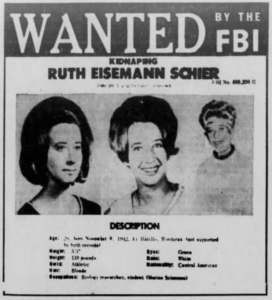 Mackle and Stewart Woodward married and lived in South Florida. They had two children. On President Nixon’s advice, Mackle wrote a book about the experience, 83 Hours ’til Dawn, which was made into two different television movies. Stewart Woodward passed away in 2013. Barbara Mackle Woodward resides in Florida. As of the last report, Krist lived in Lilburn, GA.

Information from the Atlanta Constitution, including excerpts from the book 83 Hours ’til Dawn, the Coastal Breeze News, and the FBI archives, was used for this article.

Actor Howard Morris only made five appearances as … END_OF_DOCUMENT_TOKEN_TO_BE_REPLACED