Grits, the Food of the South 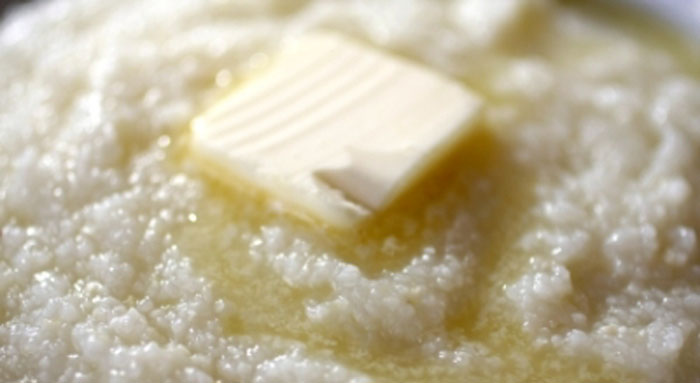 Every weekday in my early years, Dad cooked breakfast for my brother, sister, and me. Not sure what Mom was doing at 7:20 a.m. on those days, but it was Dad at the stove, getting our breakfast ready before we caught the yellow bus to our elementary school. He would have the radio on WSB, the local station, and as clear as yesterday I can still recall the sponsor’s jingle: “Northwest Orient Airlinesssssssssss.”

He always made toast out of a brand known as Roman Meal. It was brown bread and of course, it was good for you and of course we hated it. The toast was graced with butter but it was not spread in a proper manner. Each piece would have four or five chunks of nearly frozen butter that never melted. I mean, what can you do with a piece of toast like that? I have blocked out the memory of the eggs that were dumped on our plates. Whether they were fried or scrambled, I have no memory. Sometimes the blessing of selective recall can save one from a lifetime of post-trauma lingering. There is one thing I do recall clearly. I remember the sound, the taste, and the smell of one dish that was always present. It was the grits.

Now, I am only too aware that some of you are not educated in the history and elemental nobility of grits. First eaten by North America’s indigenous people, it is best devoured in a manner as close as possible to its original preparation. These days there are all kinds of sorry attempts to improve upon this remarkable food. If you remember anything, remember this: it needs no dressing up. Who would dare put lipstick on the Mona Lisa? Though they are often eaten at breakfast, the true advocate knows that a bowl of grits is bounded by neither time nor space. Numerous are the edibles that can be paired with grits: egg and grits, fish and grits, shrimp and grits. Grits when properly presented are a delightful counterpoint to any other food. Hell, just eat the damn grits by themselves and you can’t go wrong.

Read about the history of Duke’s Mayonaise and the firebrand entrepreneur that created it. Click here.

The only mistake is to try and elevate them to a position of culinary fashion that separates them from their earthly origins. I know there are all sorts of fancy pants out there who attempt to incorporate grits into some odd, updated recipe and try to call it “fusion cooking.” Do not be misled; that is a fool’s journey and deserving of no respect. Grits are akin to the sacred lotus plant. Roots in the mud with a flowery expression that reaches to the heavens above.

Okay, so what exactly are grits? I’ll give it to you fast and simple straight from Wikipedia: “Grits are a porridge made from boiled cornmeal.” If you want to know any more, you’ll need to research it yourself. Don’t be emailing me any ridiculous questions like, “What is the difference between grits and hominy?” I was born and raised in Georgia, the heart of the “grits belt,” and I have spent a lifetime answering those questions, but no more. The journey into the heart of grits is a lonely path into culture and time and is best undertaken alone.

How a Civil War battle injury led to the invention of Coca-Cola. Click here for the story.

There are a few hard and fast rules for the purists among us regarding this delight. During the boiling process, salt is added and nothing more. Upon completion of the cooking process, your grandmother’s ladle is used to gently remove the white delight and place it into a bowl with the mindful respect that is deserved. The true grits artist knows it is also permissible to create a small depression on top and add a pat of butter that will slowly melt to form a yellow pond. A dash of pepper is also allowed at this point. That’s it. I know some misguided among you add cheese or pour syrup over your grits. If I see anyone do this, and if I love you, I will forgive you. If you are not a dear acquaintance and I witness such a desecration, I will not be responsible for the rage and karma that will be brought down upon you from our common forebearers. One other potential corrupt act is the use of a nasty mixture sold as “instant” grits. This artificial by-product should be avoided at all costs.

There is one last thing I will tell you about the cooking of this linchpin of Southern cuisine. I will now instruct you in the knowledge of how to tell when grits are perfectly cooked. It is when they approach the consistency of lava. The texture should not be runny but more like the wet sand you used to make sandcastles at the beach all those years ago. The final confirmation of doneness is the sound created during the final moments as the grits, water, salt, and heat approach what Southern cooks call “criticality.” The sound heard during the boiling should reach a rapid series of deep bass notes. Imagine you are on the side of a volcano, listening to the lava burping. When you hear that sound, it is ready for your bowl. No cheese, no syrup, no frills.

Now, I’m going to go out on a limb here and guess that you haven’t allowed yourself to partake of this dish in many a year.

It is not too late to claim your heritage. Prepare your grits with love and intention, introduce a spoonful into your mouth, close your eyes, and share an experience known to our ancestors in the days of old.

You can pick up Jim’s latest book, The Magnolia Chronicles, here. Grits trace their history back to the Muscogee Indians, who inhabited Tennessee, Alabama, Georgia, and Florida. They were initially ground on a stone mill.

Grits are the official state food of South Carolina

In 1952, the South Carolina legislature passed a resolution, calling grits “The Secret to World Peace.” The resolution concluded that, “A man full of grits is a man of peace.

This may be the most unusual conclusion to a … END_OF_DOCUMENT_TOKEN_TO_BE_REPLACED

One of my favorite childhood memories comes from … END_OF_DOCUMENT_TOKEN_TO_BE_REPLACED