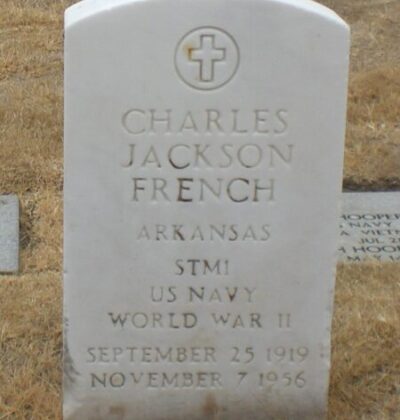 The U.S.S. Gregory was a Navy destroyer, commissioned in 1918. The vessel saw duty in WWI, patrolling the Atlantic and Mediterranean. Along with the U.S.S. Arizona, the ship made supply runs to Turkey, Greece, and Georgia before returning to the U.S. in 1919. She was decommissioned in 1922 and went into reserve in the Philadelphia naval yard.

As WWII loomed on the horizon, the Gregory and others like it were again pressed into action, having most of their weaponry removed and converted into high-speed transport ships. In January 1942, she left port in Charleston, S.C., for the Pacific theater.

The ship had been performing primarily as a troop transport. Later that year, on the late evening of September 4, the Gregory and the U.S.S. Little had just dropped a Marine battalion on Savo Island and were returning to Tunagi, in the Solomon Islands. The two ships were spotted by three Japanese destroyers and a cruiser that, along with Japanese aircraft, fired upon the two vessels. In less than three minutes, the Gregory was severely damaged and began to sink. Lieutenant Commander Harry F. Bauer gave the order to abandon ship, and the surviving crew took to the open sea. Admiral Nimitz later said, “both of these small vessels fought as well as possible against the overwhelming odds … With little means, they performed duties vital to the success of the campaign.”

Read the story of Paul Bolden, Medal of Honor recipient from Alabama

The surviving crews of both ships were in the sea, the crafts were sinking, and the Japanese continued to fire, targeting the men in the water. Most were able to climb aboard life rafts, but they knew that Japanese troops would capture them if they floated to shore. They had to find a way to avoid land until hopefully rescuers located them. One of the survivors was Petty Officer Charles Jackson French, an African American mess attendant, who was about to perform what would be one of the most heroic deeds of the war.

An orphan born in Foreman, AR., French learned to swim as a young boy in the nearby Red River. He enlisted in the Navy in 1937 then relocated to Omaha, NE after his enlistment was up. When the U.S. entered WWII in December 1941, French immediately re-enlisted. He was soon assigned to the Gregory, where he would quickly save the lives of numerous shipmates.

Read the story of John Pruitt, WWI recipient of two Medals of Honor

French was one of the surviving crew who had made it to a lifeboat. The crew was ordered to abandon the Gregory and the assault by the Japanese continued. The men had no way to move away from nearby land. Hearing others talking about what would happen if the Japanese captured them, French dove into the water, tied a rope line around his waist, and began swimming away from land, towing the life raft which held at least 15 men, some of whom were wounded. Complicating the danger of the situation was the presence of sharks swarming in the water. Undeterred, French swam on. When queried by an officer, French replied, “I ain’t scared, Sir.”

They were rescued several hours later by a landing craft. There was an attempt to segregate survivors by color. French recalled, “Then some of them white boys, what wuz on the raft, and other sailors from the Gregory’s crew said ‘He ain’t going nowhere! He is a member of the Gregory’s crew, and he damned well will stay right here with the rest of us. Anybody who tries to take him anywhere had betta be ready to go to ‘general quarters (ready to fight) with all of us.’ The boys who did all the talking was from either Alabama or Georgia. “

Ensign Robert N. Adrian was one of the crewmen who survived due to French’s efforts. He had initially discouraged French from entering the shark-filled waters, to be told that he was not afraid. Adrian only knew the last name of his rescuer and shipmate. The story may have been lost to history had he not shared it on a radio program, “It Happened in the Service”, in 1943, asking for information about French’s whereabouts. French’s sister Viola saw his story in the United Press and identified her brother. NBC was able to verify his identity through the Navy Bureau of Personnel in Washington, D.C.

After he was located and his deeds were made public, Adrian advocated for French to receive a Navy Cross, but French received only a letter of commendation from Adm. William F. Halsey Jr. It reads, “For meritorious conduct in action while serving on board of a destroyer transport which was badly damaged during the engagement with Japanese forces in the British Solomon Islands on September 5, 1942”. After the engagement, a group of about fifteen men was adrift on a raft, which was being deliberately shelled by Japanese naval forces. French tied a line to himself and swam for more than two hours without rest, thus attempting to tow the raft. His conduct was in keeping with the highest traditions of the Naval Service.” Halsey was inaccurate about one significant fact, according to those he saved. French swam and towed the raft for over six hours. 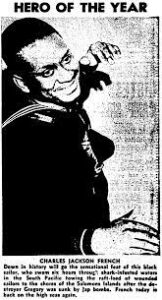 This publicity increased awareness of French’s almost forgotten heroics. Had French been white, the Navy would likely have awarded him the Medal of Honor. French was soon recognized for his heroics on trading cards issued with the tale of his exploits. He made appearances selling war bonds and received a standing ovation when introduced at a Nebraska/Creighton football game. He was named “Hero of the Year” by the Chicago Defender. French was chosen to lead the crown in The Pledge of Allegiance at a Veteran’s day event. 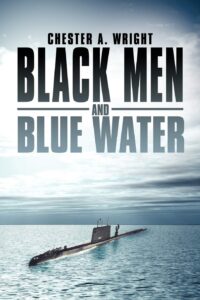 Chester Wright wrote a book about the service of blacks in the Navy entitled “Black Men and Blue Water” He interviewed French in the early 1950s. Wright published a quote from French of the experience (which appears here as he published it), “When Gregory was hit by them planes, a lot of us got off before she sunk and many of my friends wuz hurt. I was on a raft with some of them, and we started drifting towards land. I knowed if we got close enough, them Japs would kill us. They, we had been told, would soon as kill a man already wounded as anybody else. “So, I being lucky enough to not get hurt, jes put a line around my middle and started apaddling away from the beach. Then I got the hell scared outta me. I noticed they wuz sharks acircling around that raft, a-waitin for they dinner. So I thought what’s wurse: them sharks or them Japs? At least them sharks will be quick. I don’t know ’bout them Japs. They be some mean ‘mothers.’ So, I jes keep paddling. “I nearly peed on myself when one of them sharks teched my feet. I jes froze and tried to surface and float, git my feet outta the water. They wuz a whole lot of other folks in the water, some of um hurt purty bad.”

The residual from the war took its toll, however. Suffering from PTSD and plagued by alcoholism, French died at age 37 and is interred in San Diego, CA. In recent times, a movement has gained momentum in trying to have French’s deeds recognized by the Navy posthumously awarding him the Medal of Honor. Robert Adrian went on to a distinguished career in the Navy, where he lobbied for more recognition for French until his death in 2011.

French was honored at the U.S. Olympic swim trials in 2021. In San Diego in 2022, French’s family was presented with his posthumous Navy and Marine Corps medal. The Navy dedicated a pool there to French. Soon after, a bill passed the Nebraska legislature to name an Omaha post office for him.

Information from ISHOF, military.com, KETV in Omaha, and the Chicago Defender was used in the article

Actor Howard Morris only made five appearances as … END_OF_DOCUMENT_TOKEN_TO_BE_REPLACED